On Monday 7th March 2022 Two Brethren from Shakspere 1009 left the UK and headed to Ukraine with a van packed with over one tonne of urgently needed food, hygiene and medical supplies for displaced Ukrainian nationals escaping into Slovakia.

Working with the Manchester Ukrainian Community and volunteers from the Scouting Organisation, assisted greatly by very generous donations from Manchester Masons, Manchester Level Club, brethren of Shakespeare 1009 and brethren alike, Bros Thomas Daniel and Elliott Jervis had loaded the van with over 8000 of donated equipment before setting off on the three-thousand-mile round trip. The whole team on the UK side just before the long jourmey.

Oksana Nepyivoda, the volunteer responsible for arranging the customs paperwork, ensured they had a contact at the Ukrainian side and made arrangements for safe passage over the border. Bro Daniel and Bro Jervis and Oksana in UK

The journey itself, over fifteen hundred miles, was a gruelling one. It took just over 25 hours of continuous driving, stopping only for food and fuel.

The scene which greeted them in Uzhhorod, Ukraine, was heart-breaking. Dozens of coaches filled with women and children in a state of total despair were lined up waiting to leave. With men aged between 18 and 60 not permitted to leave the country, they had no idea when they would be seeing the loved ones they were leaving behind again.

Crossing over the border was a relatively simple process. Aid vehicles, such as they were, were waved through due to the urgency of distributing the supplies to those who need them. 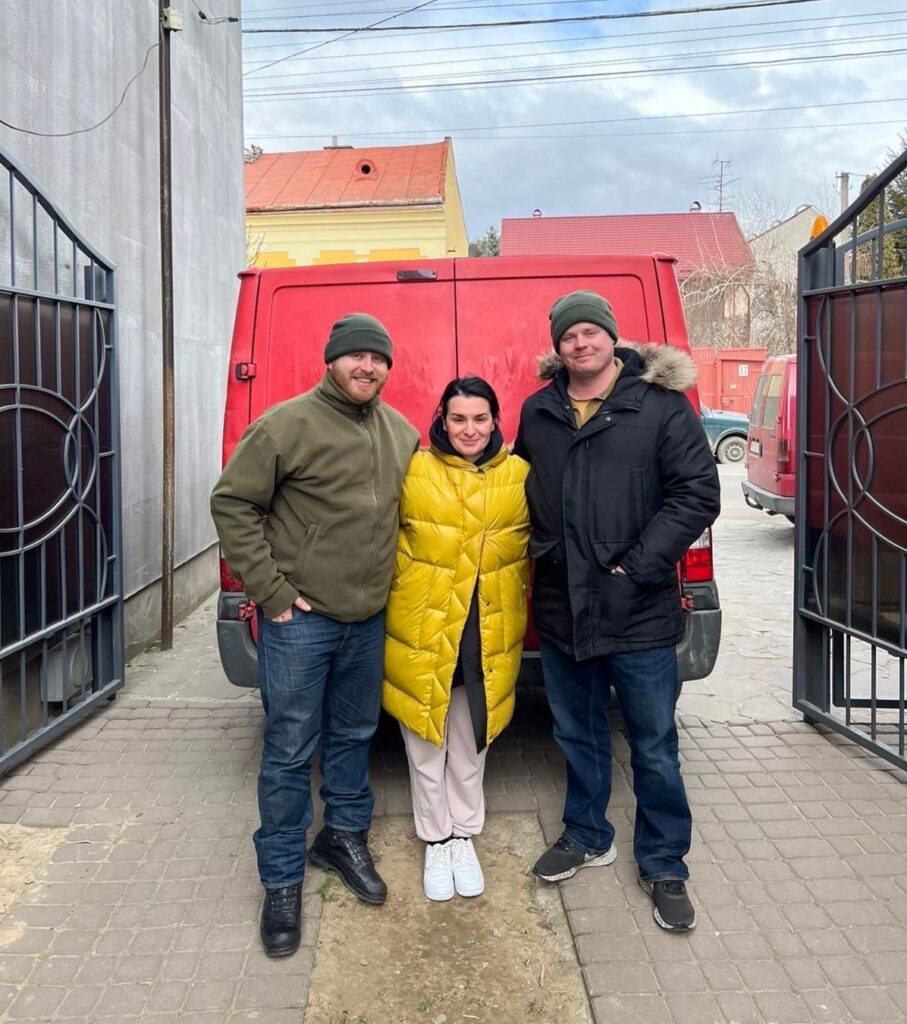 Photo with Natalia in Ukaraine just after delivery

We felt fortunate, says Bro Jervis. We had direct contact with the people coordinating the relief efforts in Uzhhorod. The list of urgently needed items was updated daily and we were bringing in specific supplies requested only hours before we left. We unloaded the van and saw the equipment being handed out to refugees less than an hour later.

Accommodation was made available at the home of one of the volunteers as any and all spare floor space in the area was being consumed by displaced citizens. Only 30km away trees were being felled to create blockades, and sandbag bunkers were being constructed by the roadside.

Bro Daniel did the first leg of the drive home. We were tired, but it felt inconsequential compared to what we were leaving behind. As we left the weather was turning and a snowstorm was starting to come in from Slovakia. Items being added to the updated list were thermal underwear, hand warmers and insoles

At our next social board, Im sure we will all spare a thought for those refugees, their families, and for all those still fighting for their freedom. From all of us at Manchester Masons, we thank all those who donated and massive thanks to Bro Daniels and Bro Jervis for their amazing effort.

Shares
We use cookies on our website to give you the most relevant experience by remembering your preferences and repeat visits. By clicking “Accept”, you consent to the use of ALL the cookies.
Cookie settingsACCEPT
Manage consent